Party: Designed the brand name of â€œå¯â€ 12 years ago, and did not take the text of Meng Jie to respond to the designer and others.

The picture below is 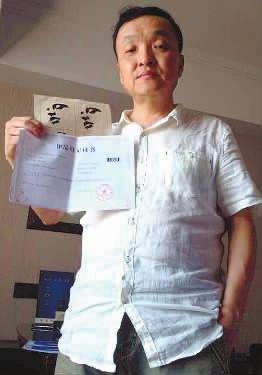 Chen Shunze, chief designer of "Rongze Gallery". Twelve years ago, he became the chief designer of Meng Jie Home Textiles. "I designed the graphic trademark of the 'å¯' brand." Nowadays, the â€œå¯â€ person avatar logo is accompanied by the Mengjie brand all over the bustling downtown. Chen Shunze repeatedly asked Meng Jie for the design fee, and still has not been able to get the penny compensation.

"There is no way, can only go to court." Chen Shunze filed a complaint with Meng Jie, demanding that he stop using the "å¯" brand graphic trademark and claim 7.9 million. On August 3, the case was held in the Intermediate People's Court of Changsha City.

"Be careful, she is like a woman looking up above, so proud and charming." Holding the design manuscript and work registration certificate 12 years ago, Chen Shunze excitedly introduced his original intention to the reporter, and wanted to prove "this It is indeed my work."

According to Chen Shunze, the graphic trademark of the â€œå¯â€ brand was formed before March 2003. "At that time, there were a lot of problems with Mengjie products." Chen Shunze told reporters that Jiang Tianwu, the chairman of Mengjie, found himself and took him to his home to solve problems.

"I was touched by his sincerity." Chen Shunze recalled that the next day he immediately went to the Mengjie showcase at Pinghetang. â€œIn the shopping mall, I just looked for a long time and asked several salespersons to find the showcase.â€ The â€œprescriptionâ€ that was issued after Chen Shunzeâ€™s pulse was: The label of Mengjieâ€™s â€œå¯â€ brand was not clear enough and the recognition was not high.

"On the next two nights, I asked my teacher who was over 60 years old, and with the help of another friend, I rushed through a night of trademarks - a woman's head looking up." Chen Shunze Explain that the design is inspired by the famous Russian painting "Anonymous Girl", which fits well with the elegant and noble style of "å¯". In addition, "I also helped to modify the design of the Meng Jie handbag packaging." He said.

"For 12 years, Meng Jie has been using this trademark, but did not pay the relevant design costs." Chen Shunze said that Meng Jie's practice violated his copyright. For more than ten years, Chen Shunze has repeatedly requested design fees from Meng Jie, but has repeatedly been pushed, and still has not been able to get a penny design reward.

The origin of Chen Shunze and Meng Jie is not only the â€œå¯â€ graphic trademark, â€œIt started as early as 1999.â€ Chen Shunze said. At that time, he graduated from the Nanjing Academy of Fine Arts as the artistic director of a TV column. In a series of home improvement programs, he talked about the understanding of the home improvement industry, who knows that this conversation touched a viewer in front of the TV - Jiang Tianwu, chairman of Mengjie Home Textiles.

Chen Shunze said that through the middleman, the two met and formed an indissoluble bond. "Despite our disparity in identity and age, we can always agree on many ideas." Soon after, Chen Shunze accepted the first commission from Jiang Tianwu to make plans for Meng Jie to participate in the National Cotton Textile Trade Fair. Although the time was rushed, Chen Shunze personally supervised the work and set up the venue with the team day and night. "The exhibition was far beyond everyone's expectations. On the third day of the fair, a contract of up to 160 million yuan was signed on the spot, making it the number one in the country."

Since then, Chen Shunze has repeatedly provided rectification and renovation opinions for Mengjie Store. At the end of April 2003, Chen Shunze was invited by Jiang Tianwu to formally join Mengjie and became the chief designer of the company. But for this experience, Chen Shunze expressed some embarrassment. Because he was less than a month, he chose to leave.

"At the time, I didn't sign the contract, but I still gave it a month's salary." Chen Shunze said that he left Meng Jie because of the problem of personal development. The two sides did not misunderstand. After that, Chen Shunze and Jiang Tianwu still have an intersection. For example, in 2005, Jiang Tianwu helped personally decorate the house.

Chen Shunze told reporters that for many years, from time to time, he would ask Meng Jie to ask for the design fee of the "å¯" brand trademark, and gradually became alienated by Meng Jie. Now "Jiang always does not even pick up my phone." "It's very boring to do this." After several considerations, he decided to choose the lawsuit to defend his rights.

Smart sensor trash bin will help you to enjoy the quality and convenient life very easily. You could easily feel the convenience that intelligent technology brings to us. You could easily control the trash bin's opening by wave your hands upon the sensor screen 15-25cm and it will soft close automatically after 5 seconds count down. Or you could easily openthe lid by your foot to kick the bin body softly and also the lid will soft close after 5 seconds counting down. E-motion induction trash can will help you to rest your hands by its perfect infrared sensor and vibration sensor technology. What's more, this electric garbage can is also designed with lid stay open function that if you have to throw the rubbish for a while, you could press the "open" button on the screen to make the lid keep open and it won't close until you press the "close". (Or it will close automatically after five minutes.) So this sensor trash bin will help you throw the trash much cleaner, more effectively and more convenient.